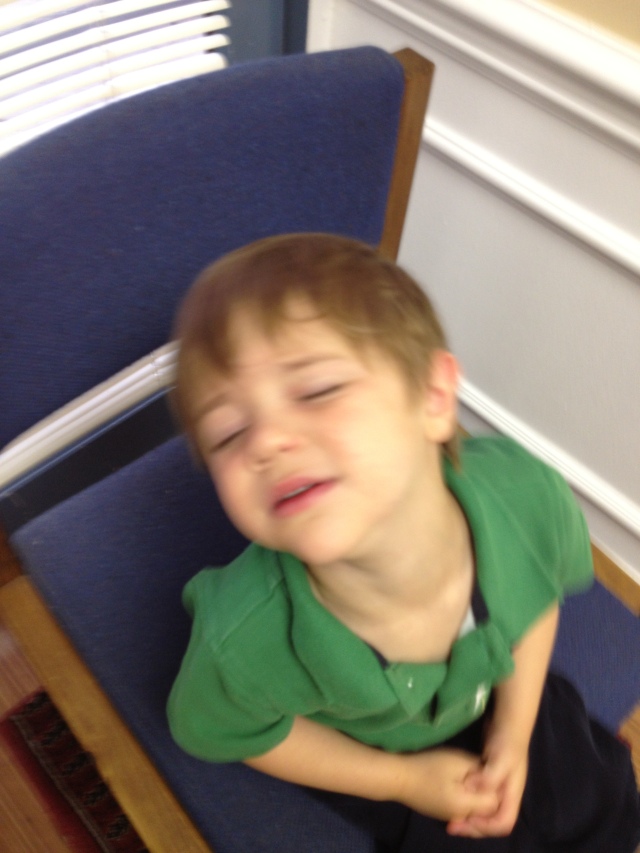 Although the photo of 39-month old Sam is a bit blurry, every parent can see through the blur to know exactly what Sam is doing! At the time the picture was taken, he was asking for juice during his sister’s dental appointment, and, of course, I had no juice available to give him. Can’t you just hear his voice paired with that face as he said “I want juicy” about 10 times in the span of a 20-minute appointment?

Although whining is not technically an emotion, there are certainly emotions behind any toddler whine. Feeling sad, disappointed, frustrated or angry can all be at the heart of the voice that grates so painfully on other’s ears. I read at some point that the response “Stop whining!” was an absolute no-no, so I never employed it as a tactic. I learned early on as a parent that ignoring whining, recommended by behavior specialists as the best way to “extinguish” (or get rid of) an undesirable behavior, worked inconsistently. Certain of my 5 children responded better to it than others did. All of them responded to it better at certain times, certain ages and in certain circumstances, depending on what was being “whined about” and how “serious” the need was.

What I found to work most consistently (nothing works perfectly!), regardless of any other factors, was using words with my children. Using my words in a calm-cool-and-collected voice allowed me to acknowledge their needs without giving into the whining behavior. It also allowed them to learn to control their behavior of whining and to self-regulate versus me trying to control their behavior (which typically only has short-term results). Allowing them to get behavior under control taught them that they are ultimately responsible for their own behavior, and that it is not up to outside sources to control it for them. Here are my top 5 responses to a whining voice and “whiney” face:

Until there is sufficient effort by the child to speak in a more normal voice, I simply keep repeating one or more of the above sentences. Sometimes I have to repeat the sentence(s) 8 or 10 times before slight change occurs. The shift to “normal” can be minimal (which I allow if the child is tired, hungry or especially “out-of-sorts”). If the child is obviously using whining “just to whine” and I know he/she can do better, I will expect a much greater shift before I can “understand” what is being said. I typically try to praise the child when the normal voice is used by saying something like “Oh, I understood your voice perfectly that time!” or “Thank you for saying that in a voice that didn’t hurt my ears!” Of course, when a child spontaneously uses a “nice asking voice,” there is always room for praising positive behavior by saying something such as “I really like the way you asked for that” or “Sure! Let me get you _____ since you asked in such as nice way.” To be sure, there’s a lot of powerful learning that happens for a child when we catch him being “good” and using appropriate behavior versus being “bad” or being inappropriate!